Navigation
Home » Are Tablets Safe for Your Child?

Do you let your child use an iPad instead of a cell phone with the understanding that tablets are a better choice? Are you confused about the conflicting information regarding wireless technology? Wondering if there is a better way to integrate tablets into your household? 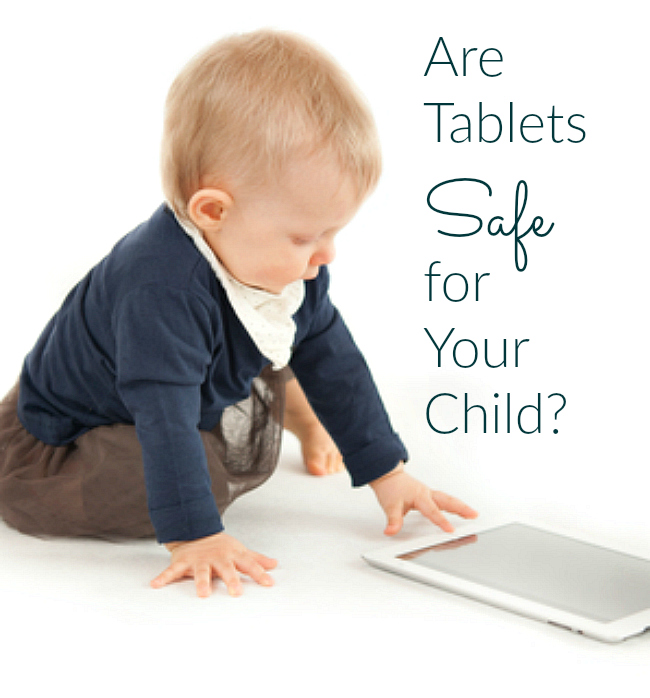 Parents understandably love the interactive nature of tablets as well as the calming effect of these devices especially when mom needs to get something done or while waiting in a crowded office. In fact, parents from all economic backgrounds are now utilizing tablets and other devices in the home.

According to the *American Academy of Pediatrics, a survey of 350 children in an urban, low-income pediatric clinic showed the following (emphasis mine):

“Most households had television (97%), tablets (83%), and smartphones (77%). At age 4, half the children had their own television and three-fourths their own mobile device. Almost all children (96.6%) used mobile devices, and most started using before age 1.

Parents gave children devices when doing house chores (70%), to keep them calm (65%), and at bedtime (29%). At age 2, most children used a device daily and spent comparable screen time on television and mobile devices. Most 3- and 4-year-olds used devices without help, and one-third engaged in media multitasking.”

*See Exposure and Use of Mobile Media Devices by Young Children

Clearly, you’re not alone if tablets, cell phones, and other devices are part of your household!

How do tablets work?

The iPad contains both radio receivers and radio transmitters relying on pulsed microwaves similar to cell phones and DECT cordless phones. According to Gizmodo, the iPad3 houses five antennas:

As we’ll see later, turning off Wi-Fi and Blue Tooth while the iPad is in Airplane mode can significantly reduce exposure to radio frequencies.

Are tablets safe for your child?

Every parent wants the best for their child. The problem with wireless technology is the presumption of innocence while the jury is still out regarding the safety of this type of electromagnetic radiation (EMR). Only ionizing radiation has been deemed dangerous. However, the BioIniative Report 2012 offers more than 1800 studies demonstrating the biological effects of non-ionizing EMR.

Let’s begin with a look at what Apple says about the safety of iPads.

Apple offers the following warning at the beginning of its user manual. (Find the manual here.)

”Read all safety information below and operating instructions before using iPad to avoid injury.

To reduce risk of headaches, blackouts, seizures, and eyestrain, avoid prolonged use, hold iPad some distance from your eyes, use iPad in a well-lit room, and take frequent breaks.”

In the section titled Exposure to Radio Frequency Energy, Apple notes that “the iPad contains radio transmitters and receivers. When on, iPad sends and receives radio frequency (RF) energy through its antenna.”  Here’s the critical information for parents (emphasis mine):

A cellular antenna is located at the top edge of the iPad Wi-Fi + 3G, when oriented with the Home button at the bottom. For optimal mobile device performance and to be sure that human exposure to RF energy does not exceed the FCC, IC, and European Union guidelines, always follow these instructions and precautions: Orient the device in portrait mode with the Home button at the bottom of the display, or in landscape mode with the cellular antenna (located under the black edge at the top of the device) away from your body or other objects.

Apple says keep iPads away from the body. What does this mean for children?

While tablets are further from a child’s head, they are still in proximity to developing organs and tissue. 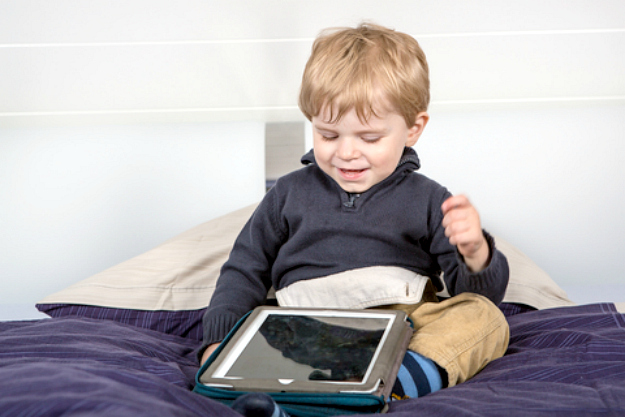 Caution from the World Health Organization

The World Health Organization stunned the world in 2011 when it classified radiofrequency (RF) electromagnetic fields as a Type 2B Possible Carcinogen acknowledging that children are more vulnerable:

An Expert Forum on Cell Phone and Wireless Risks to Children held at the Commonwealth Club of California in June of 2015 featured compelling scientific evidence showing the hazards of this type of radiation.

Dr. Mary Redmayne of Melbourne Australia offered this graphic showing the precautionary stance of numerous countries including Taiwan – which adopted a complete ban on devices for children under 2 years of age in January of 2015. 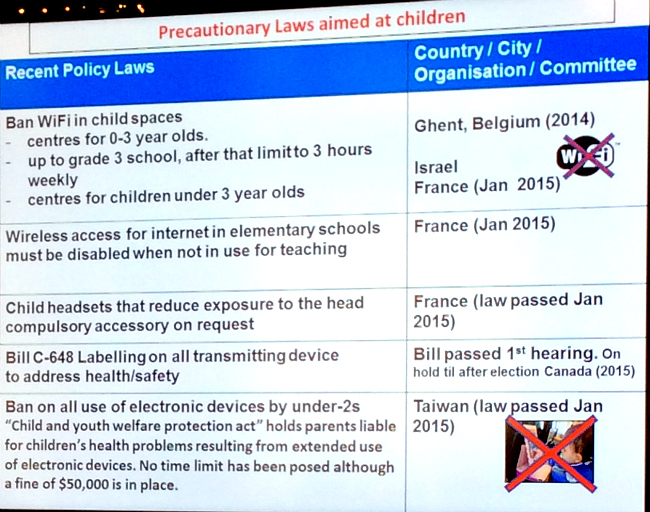 (I attended the Expert Forum on Cell Phone and Wireless Risks to Children and encourage every parent to watch the videos associated with this forum. Find them at ElectromagneticHealth.org.)

What about a child’s brain development?

In addition to the RF exposure, questions must be raised about the impact on a child’s cognitive development. Pediatrician Dimitri A. Christakis encourages parents to limit the use of tablets, despite the fact that tablets offer interactive qualities that are missing when a child passively watches TV. In the article Interactive Media Use at Younger Than the Age of 2: Time to Rethink the American Academy of Pediatrics Guideline? Christakis expresses two concerns:

1. Caregivers should always ask themselves what their child would otherwise be doing were it not for the omni-available touch screen. For example, I cringe when I see families at restaurants together, and each member has their eyes glued to their personal device, thereby bypassing an increasingly rare opportunity for familial engagement.

2. The second is derived oddly enough from the interactive nature of the device itself. The “I did it!” response, whether stated or felt, manifests itself on a neuronal level with the secretion of dopamine as part of the reward pathway. Think B. F. Skinner’s famous rat experiments. The delight a child gets from touching a screen and making something happen is both edifying and potentially addictive. In much the same way as we have seen the emergence of problematic Internet use in older children and adolescents, we may now begin to see compulsive use of iPads among our youngest patients. Therefore, limits on use are in order.

Christakis thoughts are echoed by Dr. Byun Gi-won, a medical doctor who runs the Balance Brain Center in Seoul, South Korea, a facility dedicated to helping cognitive problems stemming from computer and smart phone use. According to Dr. Gi-won,

“Heavy users are likely to develop the left side of their brains, leaving the right side untapped or under developed.” (See the interview with the Korea JoonGang Daily here.)

Suggestions for Minimizing Your Child’s Exposure

Thankfully, parents who want to keep devices in the home have options when it comes to reducing RF exposure.

The authors of the article Protect Children From EMF  appearing October 2015 in Electromagnetic Biology and Medicine provide the following advisory guidelines:

The authors also encourage parents to read the fine print of the manuals that come with these devices.

1. Bypass the wireless function entirely and wire the device.

Parents must exercise some ingenuity to accomplish this, but the iPad can be connected directly to the Ethernet. For a tutorial see How to Connect Your Device to the Ethernet. The following video demonstrates this hookup.

2. Keep the tablet in airplane mode, checking to be sure the Wi-Fi and Bluetooth are turned off.

The proliferation of wireless technology is unprecedented in human history. We can’t know the long-term health implications. Thankfully, parents can become informed and make decisions accordingly in order to protect our children and future generations. 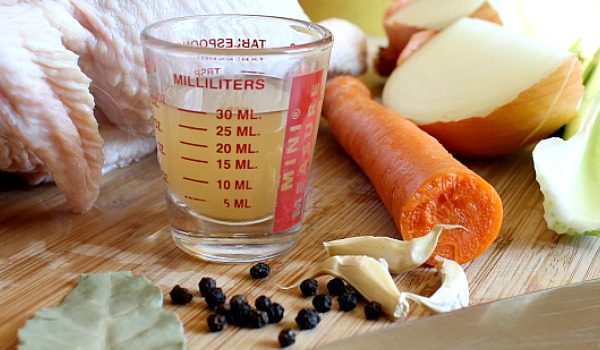 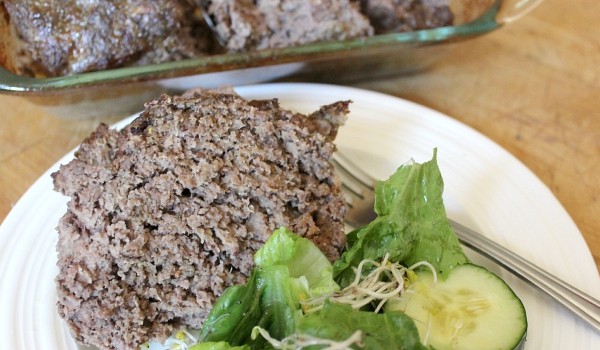